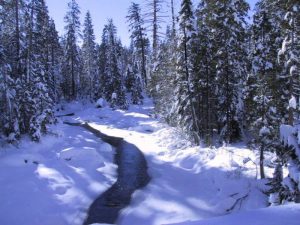 For the curious people, Gerle Creek is located on the Georgetown Divide in the Eldorado National Forest, El Dorado County, California in the central Sierra Nevada Mountains and is plainly God’s Country. Gerle Creek was named for Christopher C. Gerle, a native of Sweden (Gudde).  Gerle Creek flows out of Loon Lake down about 8 miles where it flows into the South Fork of the Rubicon River, continuing into the Rubicon River, eventually becoming the Middle Fork of the American River joining the South and North Forks of the American River at Folsom. This is where the Brattland Family originally built and has maintained a US Forest Service Summer Home (Lot 24) for over 64 years.  If you have any questions, contact me, CDR Mike Brattland USN-(Ret.)

California Lakes with Dams including current and historic Water Levels

Western US Map with Links for Highway live Video Cams including road information.

Who was Gerle and how did the creek receive its name?

Summer range and ranch location for the Gerle Brothers, early emigrants and farmers on Gerle Creek, 2 miles West of Wentworth Springs (USGS Map of 1895) on the Georgetown/Wentworth Springs/Rubicon Springs/Lake Tahoe road, next to Gerle Creek. See also G.M Wheeler Atlas 47B,D,E Sheet Calif, Nev 1876/79 .Their ranch property butted up against the Jacobson Ranch  property on the West side of the section, also on Gerle Creek.  One of two Gerle brothers  who came to Uniontown, California in 1850’s,the creek was named for Christopher C.  or Cyrus Gerle, the youngest, arriving in 1854(Mason).   Christopher  or Chris was born in Sweden in 1833, marrying his wife, Mary Clausen in Coloma, El Dorado County in 1865.  Christoper became a naturalized US Citizen on August 19, 1861 at the El Dorado County Courthouse in Placerville, California.

Mary was daughter to Peter (also called Paul) and Mary Clausen, who emigrated from Heliogoland in 1853, was born in Heliogoland in 1849.  The Clausen’s had three daughters with the oldest Anna marrying Jasper P. Jurgen’s in their native Heliogoland on October 3, 1852.   The newlyweds decided to leave for California making the trip their honeymoon.  Eight other members of the immediate family decided to head to California with the newlyweds, including Anna’s parents, Peter and Mary Clausen, their sons, Numel and Paul, their other daughters Margareta and Mary and Numel’s wife.  The other two making the trip were Chris and John Jacobsen who were distant relatives of the family. The Jacobsen’s other brother, Alex Jacobsen, came the next year to California and later married Margareta Clausen in Coloma. Jasper P Jurgens and his wife Anna Clausen Jurgens settled in Pinchem on Weber Creek, El Dorado County(Baldwin, 1975).

The ship voyage from Hamburg Germany to San Francisco around the horn of South America took six months.  Once in San Francisco, the group took a river steamer to Sacramento and eventually on to Mississippi Bar, which is now Fair Oaks, California, staying there until 1854 and then continuing their journey to Weber Creek and Pinchem in El Dorado County (Baldwin, 1975).

Peter Clausen was a boot maker and cobbler by trade.  He and his wife setup a cobbler shop in Coloma where he worked for years before retiring and moving back to Weber Creek, where he passed away in 1884, with his wife Mary Clausen passing away 4 years later in 1888 (Baldwin, 1975).

Both are buried in the Pioneer Cemetery in Coloma with their their uncle, Charles W.  or William Gerle. Christopher C. Gerle and his wife Mary later moved to Plymouth, in Amador County, California in 1877, having a third son George and three girls, Mary, Charlotte and Maggie. Charles W. Gerle was the oldest brother, born in Sweden in July, 1823 and dying March 4, 1907,   Charles  W. or CW Gerle became a naturalized US Citizen on  March 8, 1858 at the El Dorado County Courthouse in Placerville, California.   Charles W. Gerle lived in Coloma with  Minnie Johnson, who was previously married to an Englishman and had two boys Juan Johnson and Charles W. Johnson  in Sweden, with a third child George M. Johnson, born in Coloma in 1878. The Gerle Brothers used their Sierra ranch on  Gerle Creek (Gurley; Lawyer’s Cow Camp; & Wagner Bros.) to raise hogs  and cattle during the Summer months, hauling the pork products over the Sierra’s on the Georgetown/Wentworth Springs/Rubicon Springs/Lake Tahoe Road to sell in Virginia City, Nevada. The Gerle Brothers were long time neighbors in the Sierras during the Summers with Murray Camp folks just a mile North of their ranch on the way to Bennett’s Ranch in the McKinstry Lake area, as well as the Jacobsons, Francis, Wentworths, Dellars and Jerretts. By 1877, Christopher C. Gerle and his family had moved on to Plymouth in Amador County, where he was working as a laborer.   In 1881, Christopher was working as a mason in the Empire Mine in Plymouth, California (Mason).   Christopher C.  Gerle died  in Plymouth, Amador County  February 26, 1885 at age 51 as reported in a death notice in the March 9, 1885 issue of the SACRAMENTO DAILY UNION.   Gerle family sources indicate that he may have lost his share of the Gerle properties in El Dorado County in a poker game to his brother, Charles W. Gerle in Carson City which necessitated the families move to Plymouth in 1877.  According to the Georgetown Gazette, reprinted in the Mountain Democrat of Sept 16, 1916, the Gerle Brothers bought their ranch property (Gerles/ Wagner Brothers/Lawyers Cow Camp) on Gerle Creek from the Indians in the early sixties(1860s). In 1892, the California Water and Mining Company purchased the western part of Charles W. Gerle’s  property on Gerle Creek and had the land surveyed. The survey reported that the property was swampland and overflow lands which made it the property of the State of California.  In 1895, CM Fitzgerald, the superintendent of the California Water and Mining company, was granted a patent to the 440 acres of property in section 36 of  T.14N, R. 14E.. He then deeded it to his company and who in turn deeded to each of the other companies who have taken ownership since. The earliest maps including Bowman’s 1873 Map of the whole Georgetown Divide show their  ranch and the creek identified with Gerle misspelled  and written as it sounded; “Gurley.”

Gerle’s Ranch became a very important way stop on the road to Lake Tahoe from Georgetown in the “Sixties”, remaining so well into the 20th Century after the ranch property was sold off in 1889 to the California Water Company.  See also G.M Wheeler Atlas 47B,D,E Sheet Calif, Nev 1876/79 .The Wagner Brothers eventually purchased this property and have retained ownership among their family, Wagner and Veer Kamp, of the majority of Gerle Meadow around the old ranch house to this day.

In the early part of the 20th Century, Archie and Irma Lawyer leased Gerle’s Ranch from the Wagner’s about the same time they actually purchased Uncle Tom’s Cabin, at which point it became known as “Lawyer’s Cow Camp” after 1920(Errington 2000). Reviewing the original Eldorado National Forest Maps of 1916 , 1931, 1943 and 1949 shows this old ranch still listed as “Gerles.”

Later, the historic ranch was returned to the Wagners, who referred to it as Wagner Bros., Wagners and or Wagner’s Cow Camp. The 1950 Forest Service map clearly shows the ranch listed as Wagner’s but in later years returned the name to Lawyers when in fact the ranch was never owned by Lawyers and long since not leased anymore.
The US Forest Service acquired 80 acres of section 34 of Township 14N, R14E, of the original Gerle Ranch property May 3, 1920.
The Gerle Brothers lived on their ranch in Uniontown-Coloma during the rest of the year when not using their high sierra ranch on Gerle Creek. AE Brown’s small cabin on the westside of Long Meadow